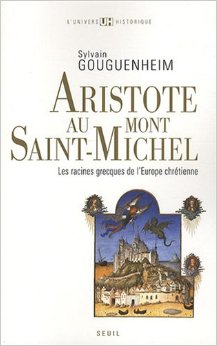 When Sylvain Gouguenheim looks at today’s historical vision of the history of the West and Islam, he sees a notion, accepted as fact, that the Muslim world was at the source of the Christian Europe’s reawakening from the Middle Ages.

He sees a portrayal of an enlightened Islam, transmitting westward the knowledge of the ancient Greeks through Arab translators and opening the path in Europe to mathematics, medicine, astronomy and philosophy – a gift the West regards with insufficient esteem.

In a new book, he is basically canceling, or largely writing off, a debt to “the Arabo-Muslim world” dating from the year 750 – a concept built up by other historians over the past 50 years – that has Europe owing Islam for an essential part of its identity.

“Aristote au Mont Saint-Michel” (Editions du Seuil), while not contending there is an ongoing clash of civilizations, makes the case that Islam was impermeable to much of Greek thought, that the Arab world’s initial translations of it to Latin were not so much the work of “Islam” but of Aramaeans and Christian Arabs, and that a wave of translations of Aristotle began at the Mont Saint-Michel monastery in France 50 years before Arab versions of the same texts appeared in Moorish Spain.

Le Figaro and Le Monde, in considering the book in prominent reviews, drank its content in a single gulp. No suspended endorsements or anything that read like a caution.

“Congratulations,” Le Figaro wrote. “Mr. Gouguenheim wasn’t afraid to remind us that there was a medieval Christian crucible, a fruit of the heritage of Athens and Jerusalem,” while “Islam hardly proposed its knowledge to Westerners.”

Le Monde was even more receptive: “All in all, and contrary to what’s been repeated in a crescendo since the 1960s, European culture in its history and development shouldn’t be owing a whole lot to Islam. In any case, nothing essential. Precise and well-argued, this book, which sets history straight, is also a strongly courageous one.”

Published less than a month ago, the book is just beginning to encounter learned criticism. Sarcastically, Gabriel Martinez-Gros, a professor of medieval history, and Julien Loiseau, a lecturer, described Gouguenheim as “re-establishing the real hierarchy of civilizations.”

They said that he disregarded the mathematics and astronomy produced by the Islamic world between the 9th and 13th centuries and painted the period’s Islamic civilization exactly what it was not: obscurantist, legalistic, fatalistic and fanatic.