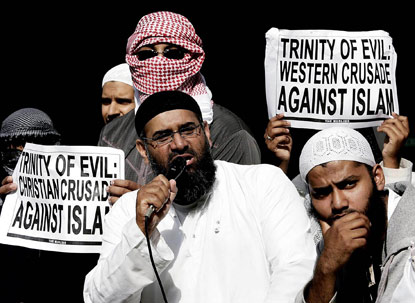 “The decision by the Home Secretary, Alan Johnson, to ban the group Islam4UK will achieve little.

“As with some previous bans on extremist organisations, the group will simply reorganise under a new name, as it already has on at least one occasion. Worse, though, the Home Secretary appears to have fallen into the trap set him by the group’s notorious but media-savvy leader, Anjem Choudary.

“Mr Choudary has proven himself adept at grabbing publicity for what is apparently an almost entirely paper organisation. His announcement earlier this month that it planned to hold a protest march in Wootton Basset against the war in Afghanistan appears to have had no basis in fact: no application to hold a demonstration was ever made. This did not prevent much of the media from covering it at length, however; now the Home Secretary has simply given Choudary new victim status.

“There are real terrorist organisations that deserve to be banned. But Mr Choudary is telling the truth when he denies that his is a terrorist group: rather, it is a benefit claimants’ exercise in macho fantasy and a prop for his own ego. Most people find Choudary’s views repellent but he should be allowed to express them, if only to remind us just how silly and narcissistic is this armchair warrior from Welling. He will be delighted that Mr Johnson has instead taken the bait as intended.”

This is a sensible piece with which we can broadly agree. But it has to be said that, when it comes to giving Choudary and his tiny group of idiots publicity that is out of all proportion to their significance, the Standard itself has been one of the worst offenders.

We have been treated to such articles as “The Pope must die, says Muslim”, “I want to see flag of Allah flying over Downing St”, “Islamist group march for ‘full sharia law in Britain’”, “Islamist sect banned as security threat ‘is recruiting teenagers’”, not to mention “Wootton Bassett on parade as Islamic hate row grows”.

Before it starts lecturing others about falling for Choudary’s publicity-generating stunts, the Standard might perhaps consider reviewing its own editorial policy.