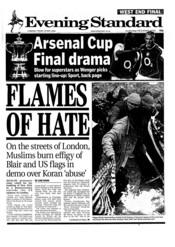 The Muslim Council of Britain has written to Ken Livingstone, asking for his support in combating “the often provocative and sensationalist style of reporting of Muslim affairs in the London paper, Evening Standard”.

The MCB is particularly concerned by the Standard’s misleading account of the recent protest outside the US embassy against the desecration of the Qu’ran at Guantánamo. The MCB includes a selection of the abusive and threatening emails it has received as a result of the Standard‘s irresponsible journalism.