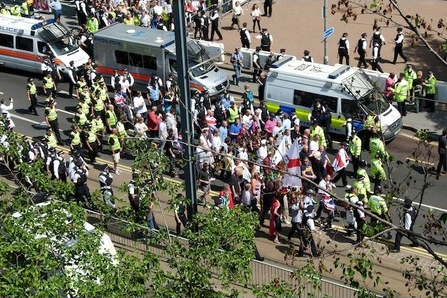 The roughly 40 English Volunteer Force demonstrators were outnumbered at least three-to-one by counter demonstrators. Angry chants were traded between the groups rallying in opposing pens outside the UK Border Agency offices in Wellesley Road, including chants of “scum” and “Nazi scum”.

There were occasional scuffles as the demonstrators passed each other, but the rallies, kept well apart by police, passed off without major incident. Two anti-fascist demonstrators were pinned to the ground by police as their group by Sydenham Road tried to surge past a police line. Superintendent Simon Causer, Public Order Commander with the Met, said: “I am absolutely satisfied with the way the day went. “I am pleased with the restraint showed by both sides.”

The group of EVF supporters spent around 45 minutes outside Lunar House after meeting at East Croydon station and rallying briefly outside the Whitgift Centre car park in Wellesley Road. Around 120 trades unionists formed the bulk of the counter demonstration, arriving at Lunar House from 11am. John Morgan, of the Croydon branch of the Public and Commercial Services Union, which represents staff in Lunar House, said: “We made our point very strongly but in a peaceful way. The EVF is not welcome in Croydon and people turned out in large numbers to show them that.”

At the end of the rallies, EVF supporters were escorted by police to East Croydon station. Most of the counter-demonstrators were kept by police in Sydenham Road until the EVF had moved off. The EVF supporters boarded the 13.34 train from East Croydon towards London, accompanied by police. They were understood to be heading to London Bridge to get to another planned demonstration in Woolwich.

Among the motley collection of fascists mobilised by the EVF was veteran neo-Nazi Richard Edmonds of the National Front. The South East Alliance, who sent a contingent headed by former EDL Essex organiser Paul Prodromou/Pitt, have been trying to put a positive spin on the derisory turnout.

Update:  We have been contacted by Marc Hepple of the EVF who tells us: “Your information that you have wrote is all false. It could not be any futher from the truth there was a least 100 british patriots there for evf.” Well, I was in Croydon myself and I counted the EVF as they marched past. I put the attendance at around 40, as did both Hope Not Hate and the Croydon Advertiser. The photo above provides additional confirmation of that figure.

Update 2:  The demonstration in Woolwich turned out to be even more of a disaster for the fascists. The South East Alliance had predicted that “tens of thousands” of supporters would join them on a march to Westminster to protest against terrorism, but so few turned up that the march had to be cancelled. See Hope Not Hate and EDL News.