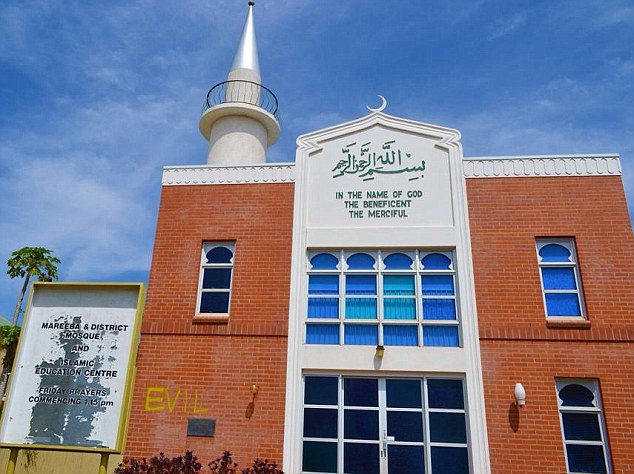 Vandals have spray painted the word “Evil” across a far north Queensland mosque – an act the local mayor describes as deeply saddening. Worshippers arrived at the mosque in Mareeba, inland from Cairns, on Friday morning to find their place of worship defaced with the yellow paint.

Mayor Tom Gilmore told AAP the mosque had been part of the community since the 1950s.

“This is entirely unacceptable behaviour by anybody in this community,” he said soon after visiting the site on Friday. The thing that is deeply saddening is that it has been in this community since the mid-fifties. I don’t think it’s ever been defaced before in that time.”

Mr Gilmore said a large group of “highly respected” Muslims had lived in the community since the 1920s.

He said the graffiti was visible from the street.

Mr Gilmore said he understood a series of anti-terrorism raids in Queensland and NSW had left people frightened, but targeting innocent people was not the answer. He said Mareeba’s Muslim community was highly respected, honest and hard-working and didn’t deserve to be connected to extremist groups.

“I won’t tolerate that connection, it’s just unfair,” he said. “The events of the last six weeks internationally have been horrifying, it’s horrifying stuff, and I’m quite sure the Muslims in our community are equally as horrified.”

He said Mareeba was a multicultural town with residents from 64 countries. The attack on the mosque did not reflect the attitudes of the wider community, he said. He had a message for those responsible: “You need to take a very close look at yourselves and the way they’re judging one lot of people by the actions of others”.

The graffiti was spray-painted on the mosque some time before 7pm (AEST) on Thursday, a spokesman from Queensland police told AAP. No arrests have been made but investigations are continuing.