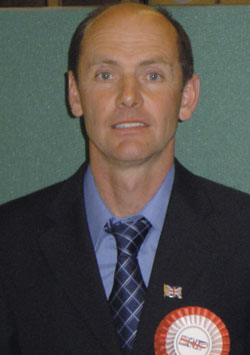 A Leicestershire county councillor is being investigated after distributing a leaflet which criticised Muslims.

Earlier this year, Graham Partner – who quit the BNP to sit as an independent – sent out a New Year message to voters in his Coalville division. It featured part of an article from a national newspaper which said victimhood “comes easily” to followers of Islam.

The article added: “Every terrorist atrocity, every blood-soaked massacre is justified by reference to imagined grievances. But the greatest persecutors of other faiths are Muslim, themselves. The response from the Western church leaders is deafening silence, afraid to accept that their ideological paradise of multi-cultural, multi-faith, left-wing society is nothing more than a fantasy.”

Conservative Peter Lewis, said: “The leaflet certainly cocked a snook at the county’s equality and human rights policies, and as it was issued in his role as a county councillor, it reflected badly, in my view, on the council.

“It certainly seemed to me designed not to build bridges or foster tolerance but to stir up and fire division and hatred around the same period as the EDL march (which took place in Leicester in February). Mr Partner has resigned from the BNP but has clearly retained its combative posture.”

Coun Partner said the complaints were politically motivated, and insisted the leaflet was well-received by people living in his ward. He also said the message was not penned by him, but copied from and attributed to Daily Express columnist Leo McKinstry.

He said: “Most of the people who received one of the leaflets said they agreed with what was printed. The only complaints the council has received are from politicians who want to get me into trouble. I didn’t write the article, it was an extract from a piece printed in a national newspaper.”

The findings of the investigation will be presented to the council’s cross-party standards panel of councillors soon.

If Coun Partner is found to have broken the code of conduct, he could face censure ranging from a written warning to suspension.

Controversial: An extract from the leaflet

The narrative of victimhood comes easily to followers of Islam. They constantly bemoan the prejudice they have to endure and the oppression they suffer in the bigoted western world, where Islamophobia is supposedly rampant.

Every terrorist atrocity, every blood-soaked massacre is justified by reference to imagined grievances. But by far the greatest persecutors of other faiths are Muslim hard-liners themselves.

The great Caribbean writer VS Naipaul once described Islam as “sanctified rage”. The proof of those words has been graphically illustrated by a growing catalogue of barbarities committed by Islamic militants against Christians.

Suleman Nagdi, spokesman for the Leicestershire Federation of Muslim Organisations, says in response: “As a holder of public office, one must uphold the highest standards of conduct which are geared towards unitingand not dividing them.

“The Muslim community was the target of the leaflets which simplified very complex issues. Extremism exists in society and must be rooted out. Christians and Muslims have superb relations which councillors and others should take time to learn about rather than picking dubious examples to suit political purposes.”