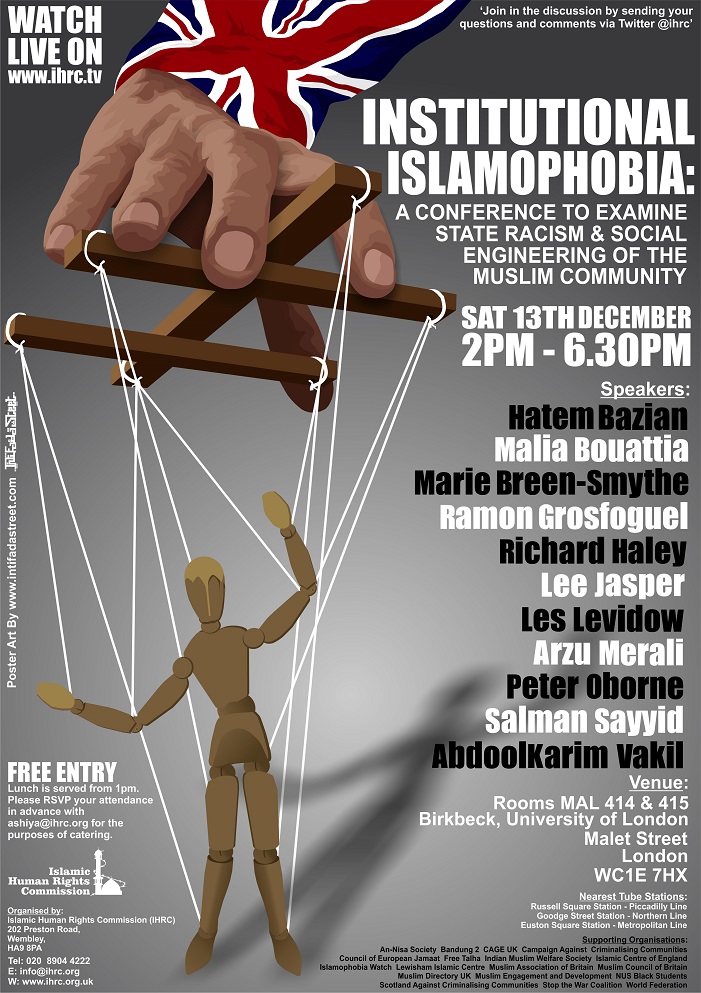 INSTITUTIONAL ISLAMOPHOBIA: A conference to examine state racism and social engineering of the Muslim community

The Islamic Human Rights Commission (IHRC) will be holding a conference focused on tackling Islamophobia that will take place on Saturday 13 December featuring an expert panel of speakers.

The focus of the event is to analyse institutional and structural forms of prejudice and hatred with some focus on recent events, particularly surrounding education, political activism, the criminalisation of dissent, the role of the media and the Prevent agenda.

Chair of IHRC, Massoud Shadjareh said: “The last few years have seen exceptional increase in public discourse around Muslims, perpetuating bigotry towards Muslims and resulting in an intensified climate of fear that prevents people from expressing their ideas and beliefs. The extreme marginalisation of Muslims is an issue that affects everyone – it is an issue of democratic deficit where all citizens must look to the adverse effects.”

The aim of the conference is not simply to rehash and configure what Islamophobia entails, but to instead discuss strategies and solutions with systematic approaches and bridging together ways to move forward.

The afternoon will begin with two panels addressing the audience. Each speaker will give a presentation on their own work while also outlining their concerns surrounding state Islamophobia. The range of speakers is wide with the likes of renowned academics Salman Sayyid, AbdoolKarim Vakil and Hatem Bazian making appearances as well as activists such as Malia Bouattia and Richard Haley (for the full list of speakers, please see blow.) This will then be followed by an interactive Q&A and discussion with the audience.

The conference will also be broadcast live on www.ihrc.tv where viewers around the world will be able to participate and engage as though they too are there. Recorded video of the event will be kept for archival and academic purposes.