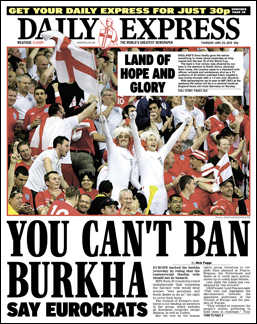 Europe backed the burkha yesterday by ruling that the controversial Muslim veils should not be banned.

MPs from 47 countries voted unanimously that outlawing the full-face veils would deny women “who genuinely and freely desire to do so” the right to cover their faces.

The Council of Europe’s resolution is not binding on members of the group, which includes all European countries except Belarus, as well as Turkey. But the vote by the human rights group threatens to torpedo bans planned in France, Belgium, the Netherlands and Spain as it could open governments up to costly legal battles.

Last night the ruling was condemned as “out of touch”. UKIP leader Lord Pearson said: “This vote just highlights the disconnection between the appointed politicians of the Council of Europe and the peoples of Europe. They refused to represent the people’s wishes, preferring to hold them in contempt.”

Tory MP Philip Hollobone said: “It just goes to show how out of touch European politicians are with popular opinion. I have no doubt that the majority of the British public are against the wearing of the burkha and the full-face niqab veil.”

The Council of Europe also branded the Swiss bigots for their ban on the construction of Islamic minarets. Last year Switzerland banned the building of the minarets – towers used to call Muslims to prayer – after a nationwide referendum. Politicians claimed the minarets represent militant Islam.