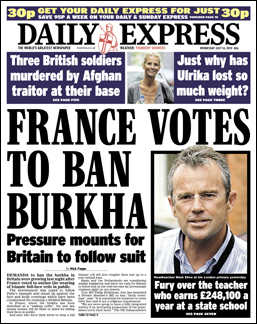 Demands to ban the burkha in Britain were growing last night after France voted to outlaw the wearing of Islamic full-face veils in public.

The Government was urged to follow Paris’s example and stand up against the face and body coverings which have been condemned for creating a divided Britain.

In France, where the burkha has been described as a “walking coffin”, the new law means women will be fined or jailed for hiding their faces in public. And men who force their wives to wear a full Islamic veil will face tougher fines and up to a year behind bars.

Spain and the Netherlands are considering similar legislation and there are calls for Britain to follow suit as the veils become an increasingly common sight on our streets.

Tory MP Philip Hollobone, who has launched a Private Member’s Bill to ban “facial coverings”, said: “It is unnatural for someone to cover their face and it not a religious requirement. We are never going to have a fully integrated society if an increasing proportion of the population cover their faces.”

A ban on burkhas is supported by 99 per cent of Britons, a Daily Express poll found last month.