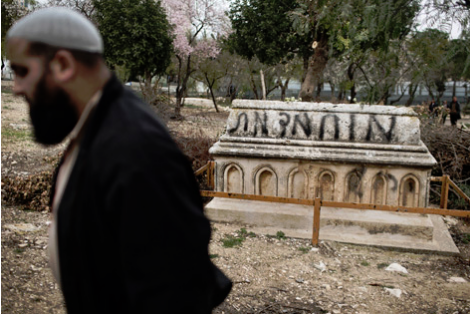 “The words ‘price tag’ and Stars of David were scrawled on around a dozen tombs in the Muslim cemetery in Mamilla in central Jerusalem,” a police spokeswoman told AFP, saying an inquiry had been opened.

An AFP correspondent at the scene said the vandals had also written “Mohammed is dead” and “Maale Rehavam” on the tombs some of which date back to the 12th century.

Price tag is a euphemism for hate crimes carried out by Israeli extremists which generally target Palestinians or Arabs and their property.

Such incident often take place in retaliation for Israeli government moves to dismantle unauthorised settler outposts, with Thursday’s vandalism apparently linked to the removal of six caravans from the Maale Rehavam outpost in the southern West Bank a day earlier. The move sparked angry protests by settlers and their supporters in and around Jerusalem.

There have been several attacks on Mamilla graveyard, known in Arabic as Ma’man Allah cemetery, which dates from the 12th century and is the resting place of several Sufi saints.

Descendants of those interred in the west Jerusalem cemetery say it also houses the remains of soldiers and officials of legendary Muslim ruler Saladin.