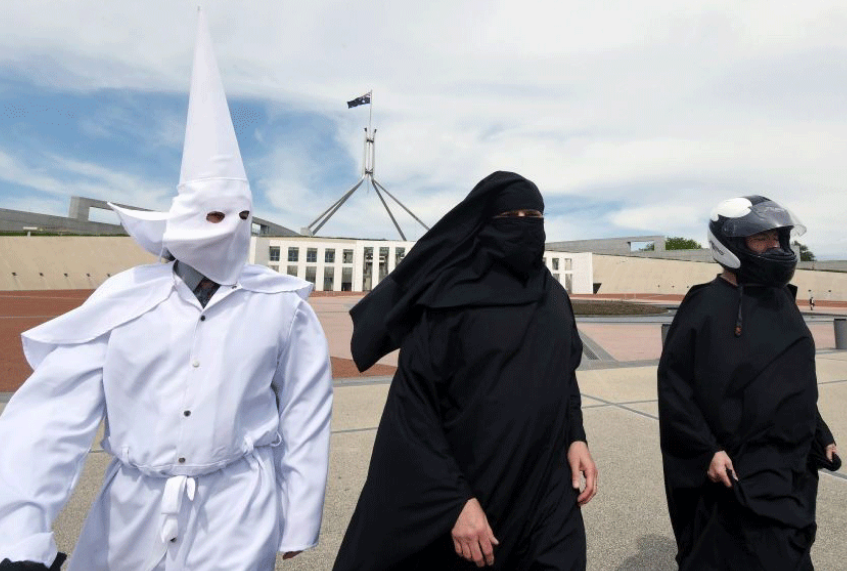 Three anti-burqa protesters have attempted to enter the Australian parliament dressed variously in a Ku Klux Klan hood, a motorbike helmet and a niqab.

The men, members of group called Faceless which has previously protested at other public buildings, cleared the front entrance security checkpoint on Monday, but were asked to remove their head coverings and stayed in the front hall area for only a short time.

Sergio Redegalli, Nick Folkes and Victor Waterson were trying to test parliamentary security rules in Canberra after the presiding officers – the Speaker, Bronwyn Bishop and the Senate president, Stephen Parry, revoked an earlier decision to segregate people with facial coverings in the public galleries.

The group called for a ban on the wearing of the burqa in Australia, claiming the garment was “contrary to women’s rights”.

Redegalli, Folkes and Waterson said security had forced them to remove their head coverings and keep them off while in Parliament House “because we’re males, so there’s a bit of sexism there”.

The Australian Christian Lobby’s Queensland director, Wendy Francis, who saw the protest, described the stunt as “so hurtful” and said Muslim women she knew “wanted a peaceful Australia every bit as much as much as my Christian friends”.

Francis said it was “distressing” to see someone dressed in the Ku Klux Klan outfit at the front of the Australian parliament. “To identify that [the KKK] with a Muslim woman is extremely confronting and hurtful,” she said.

The Department of Parliamentary Services said the visitors were requested to removed the items obscuring their faces “as the items were deemed to be protest paraphernalia”.

On 2 October, Bishop and Parry approved an interim rule based on a rumour that protesters, including men, might be planning to enter parliament dressed in niqabs. The “interim” decision required persons with facial coverings entering the galleries of the House of Representatives and Senate to be seated in separate shielded areas normally reserved for schoolchildren.

After widespread criticism of the decision, Bishop and Parry revoked the decision last Monday and replaced it with a new ruling that all visitors entering Parliament House “be required to temporarily remove any coverings that prevent the recognition of facial features”.

This would allow security staff “to identify any person who may have been banned from entering Parliament House or who may be known, or discovered, to be a security risk”.

“Once this process has taken place, visitors are free to move about the public spaces of the building, including all chamber galleries, with facial coverings in place,” the ruling said.

Australia’s race discrimination commissioner, Tim Soutphommasane, said on Monday that it was “reassuring that parliament’s security screening protocols are working as intended”.

The three protesters described themselves as supporters of the Party for Freedom, the Australia First party and Liberal party, and said they wanted to make clear that they did not support the Ku Klux Klan.

Previous media reports indicate Redegalli, an artist, is responsible for a “say no to burqas” mural on a wall in Newtown, Sydney, and was interviewed on the ABC program Dumb, Drunk and Racist in 2012.

Waterson, a former One Nation candidate who ran for the Australia First party in the Sydney seat of Bennelong in 2013, was quoted in August last year as saying: “I’m campaigning for a white Australia.” He received 0.6% of the primary vote.

Folkes, chairman of the Party for Freedom, was part of a protest outside Marrickville Woolworths in July against the Sydney shopping centre’s “Happy Ramadan” signs. He described the advertising as “offensive” and said the Party for Freedom “doesn’t support multiculturalism at all and we want Muslim immigration to Australia to stop”.

He also appeared in the SBS program Living with the Enemy in which he argued against immigration from Africa. The Party for Freedom’s policies include a “halt to Muslim and third world immigration to protect the survival of the Australian people”.