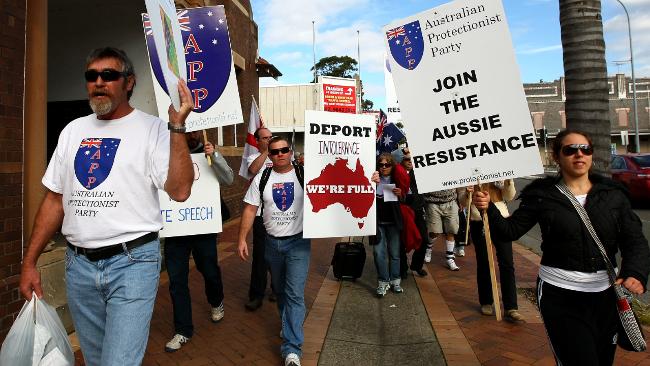 The stage appeared set for two opposed cultures to clash in Sydney’s ethnically mixed working-class suburb of Lidcombe yesterday. But if any outright antagonism had been going to happen between the Australian Protectionist Party and Hizb ut-Tahrir, police were determined not to allow it, keeping the groups at a distance from one another.

The APP met in a small park to express their need to “protect” the Australian way of life. Around the corner from Australian flag-waving protesters, Muslims from around Sydney and overseas gathered in a local conference hall to discuss the “Struggle For Islam in the West”, with the Hizb ut-Tahrir.

“Infidels ‘r’ us!” read one APP placard, as members marched past the conference centre. After regrouping in the park around the corner, the APP contingent mustered for another lap of the town centre and yelled “Hey, hey, ho, ho, Islam must go”and “No sharia law”.

Nick Folkes, the Sydney organiser for the APP, believes that the HT should be banned in Australia and thinks that practising sharia law should be illegal in Australia. “Sharia law is an archaic legal system that treats woman as second-class citizens,” he said. “We’re not asking them to change their skin colour or religion. But if they come here, they must reject sharia law.”

So, if the APP is not asking Muslims to change their religion, what is the meaning of the “Islam must go” demand? Not only does The Australian uncritically repeat Folkes’s lie but the report gives no indication at all of the APP’s actual politics. It is in fact a far-right racist organisation whose website prominently features a speech by Arthur Kemp, the South African white supremacist who is in charge of political education in the British National Party. (“Another one of Arthur Kemp’s excellent speeches…not to be missed.”)

The APP have reproduced The Australian‘s report, which they obviously welcome as a useful piece of publicity. Interestingly, however, the APP’s extract omits Folkes’s nonsense about “not asking them to change their skin colour or religion”. This fraudulent claim is made for public consumption, in an attempt to present a more moderate image, but wouldn’t go down at all well with the APP’s members and supporters.