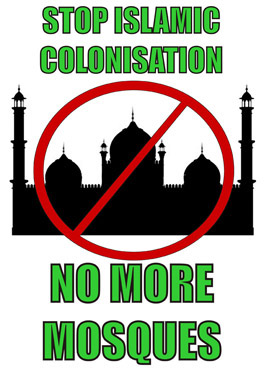 “In response to popular demand, Excalibur has developed a brand new range of dramatic political slogan T-shirts, headlined by one which reads ‘Stop Islamic Colonisation: No More Mosques’.

“The launch of the new collection coincides with renewed squawking from extremist leftist politicians and newspapers in Wales today over the use of Welsh folk hero Owain Glyndwr in Excalibur’s ‘Welsh by the Grace of God T-Shirt’ design.

“The addition of the 29 new designs to Excalibur’s range pushes the total number of available designs on offer to 44, making Excalibur the single largest supplier of patriotic wear in the country.”