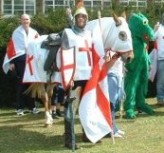 As part of its campaign to defend “English culture” against the rampaging Islamic hordes, the British National Party organised a St George’s Day celebration in its stronghold of Barking & Dagenham.

Though the fascists claim that “over 100 supporters” joined their parade, I can only count about 20 adults and a handful of children. Don’t know what happened to the rest of them. And check out the green costume, which I think is supposed to be a dragon.

As a theatrical spectacle, this event clearly fell somewhat short of the Nuremberg rallies.