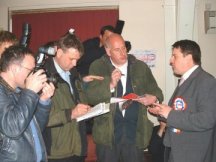 The BNP reports on the launch of its local election campaign:

“BNP leader Nick Griffin spoke of the significance of the day of the launch; Good Friday was deliberately chosen to emphasise that Britain was fundamentally a Christian country and that the elections on May 4th offer the electorate an opportunity to vote for the continued demise of our traditions and values under the failed trio of Old Gang parties who continue to pander to the twin evils of multiculturalism and globalisation and further have failed to grasp the very real threat posed by militant Islam, or a renaissance of traditional western European Christian values under the stewardship and guidance of the British National Party.”