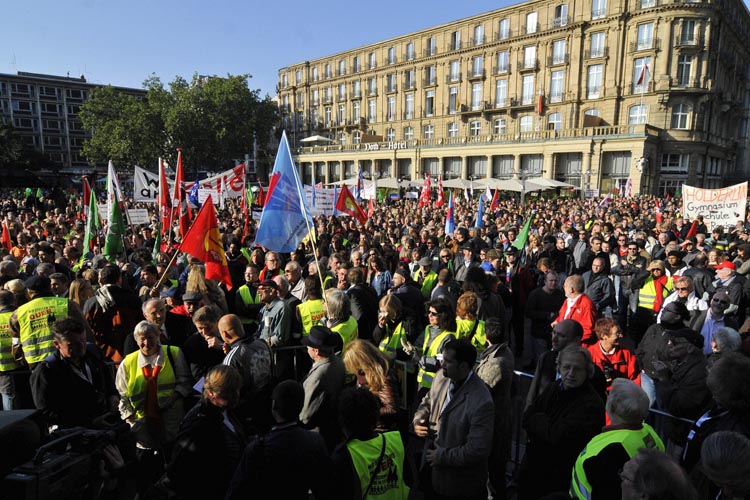 IT HAD been planned as a central meeting of leading proto-fascists, rightwing populists and neo-nazis. A grand “European Anti-Islamic Congress” was scheduled to be held today Saturday 20th September in the huge German city of Koeln – Cologne – on the banks of the river Rhine.

Invitations had gone out to the Italian Liga Nord, the French Front National, the Austrian FPOe and the BZOe, the British National Party the Belgian Vlams Belang and others. Theme of the weekend “congress” at which the organisers confidently expected 1500 participants was a campaign against the “advance of Islam in Europe”.

The organisers belong to a political grouping called Pro Koeln. This rag tag and bobtail splinter group with a couple of dozen members picked up just under 5 pc of the votes for Koeln’s city election and have a fraction of five councillors in the city parliament. These have a small basis amongst backward elements in the pubs and on the housing estates and have set up a campaign to fight against the building of a central mosque for the city’s Moslem population.

In fact most of the organisers are ex-members or secret members of extreme rightwing groupings like the Republikaner, the German League for Folk and Homeland and the NPD but they hide behind the new respectable organisation “Pro Koeln”. As a front orginsation the right are keen to set up similar groups in other German cities. The Congress this weekend was to be a signal of their presence and their growth.

Yesterday evening – Friday 19th – supporters of the congress started to arrive in Cologne. Confident that they had organised everything down to the last detail, they were aghast to discover that no taxi driver would take them to their destination, no restaurant honoured their table reservation and no hotel would give them keys to their rooms. They had to snatch a snack where they could under cover of darkness and sleep rough.

One group of rightwingers took a steamer trip down the river Rhine intending to hold speeches at various stop-off points but the vessel was stoned from the banks by demonstrators. When the captain discovered who his passengers were, he refused to take them near land and they spend five cold hours out in open water safe from the stones which had smashed several of his windows. Eventually he put them ashore. They tried and failed to get taxi drivers to take them on. Most taxi drivers nowadays are foreigners as are restaurant owners and waiters and they knew who they dealing with.

As the sun rose this morning on the city, tens of thousands of Cologne residents started to converge on the city centre to join a massive demonstration of protest at the presence of the Right in the hometown. All the main political parties, the churches, the trade unions, immigrant groups had all called for support for the demo. At present as I write this there are an estimated 40,000 foregathered in protest. A magnificent rebuttal of the claims of the tiny grouplet which claims to speak “for Cologne”.

Even the Christian Democrats who had effectively helped the Pro Koeln group by voting with them against the plan to build a central mosque took part and the CDU mayor of the city Fritz Schramma gave a fighting speech condemning the Europen fascists. The trade union federation made excellent speeches, local bands played adaptations of well-known songs with new lyrics. All nationalities and generations are enjoying a day of anti-fascist solidarity.

Meanwhile at Cologne airport around 150 potential participants in the Grand Congress landed from abroad only to discover that they are still unable to leave the airport. Militant leftwingers are staging a sit-down on the rails of the airport/city shuttle trams. Taxi drivers refuse to move the rightists.

And back in the city centre, a rightwing rally on the Heumarkt – Haymarket – which had only attracted a few dozen demonstrators has just been summarily forbidden by the police because of a threat to the safety of Cologne’s citizens. The police union itself in this traditonally cosmopolitan and hospitable city is taking part in the anti-fascist demonstration with green Police Union banners a few hundred metres away at the main demo but a few dozen crazy ultralefts have been attacking the police as if they were the enemy!

So the Grand Congress to rally European anti-islamists has fizzled out in an embarassing fiasco for the right. The unions, the SPD and the Left together with most of the sects and others have done a tremendous job in organising the resistance. An inspiration for all.