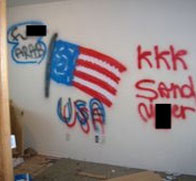 The FBI is investigating the death of a Muslim leader whose body was found inside a burned home in Yermo that had recently been spraypainted with racial epithets and Nazi symbols. Authorities have deemed the June 27 fire suspicious, but said it could take weeks before they are able to determine how the blaze started.

Neighbors who reported the fire told 911 dispatchers they heard a loud boom – almost like an exploding propane tank – just before the fire erupted. When firefighters doused the flames 40 minutes later, they found the body of 51-year-old Imam Ali Mohammed inside the East Yermo Road house he had moved his family out of last month.

Mohammed recently left Yermo for Victorville because he was being harassed, said CAIR spokeswoman Munira Syeda. Coupled with the anti-Muslim graffiti and the fact that Mohammed’s Yermo mosque was torched by arsonists two years ago, CAIR attorney Ameena Qazi asked the FBI to investigate “the possibility of a bias motive in his death.”