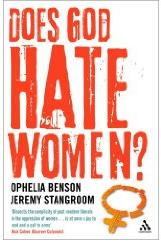 An academic book about religious attitudes to women is to be published this week despite concerns it could cause a backlash among Muslims because it criticises the prophet Muhammad for taking a nine-year-old girl as his third wife.

The book, entitled Does God Hate Women?, suggests that Muhammad’s marriage to a child called Aisha is “not entirely compatible with the idea that he had the best interests of women at heart”.

It also says that Cherie Blair, wife of the former prime minister, was “incorrect” when she defended Islam in a lecture by claiming “it is not laid down in the Koran that women can be beaten by their husbands and their evidence should be devalued as it is in some Islamic courts”.

This weekend, the publisher, Continuum, said it had received “outside opinion” on the book’s cultural and religious content following suggestions that it might cause offence. “We sought some advice and paused for thought before deciding to go ahead with publication,” said Oliver Gadsby, the firm’s chief executive. The book will be released on Thursday.

Sounds to me like a cynical attempt by the authors, Ophelia Benson and Jeremy Stangroom – who are associated with the notoriously Islamophobic website Butterflies and Wheels – to boost sales of their book, which has already been turned down by Verso.

The report concludes with a quote from a Muslim critic: “No one will swallow talk about child brides. It would lead to a huge backlash, as we saw with The Jewel of Medina.” And who is the individual the Sunday Times has chosen to approach as a representative voice of British Muslims? Wouldn’t you know it, it’s Anjem Choudary, leader of the minuscule gang of provocateurs who previously traded under the name of Al-Muhajiroun.

Which only goes to show that, when it comes to depicting the UK Muslim community, the “serious” press often shows the same irresponsibility and contempt for accuracy as the worst of the tabloids.

Update:  See also Benson’s opinion piece in the Observer and Yusuf Smith’s response (“The article left me wondering how a respectable liberal Sunday broadsheet can print such a shoddy article containing such obvious generalisations and faulty logic”) at Indigo Jo Blogs.