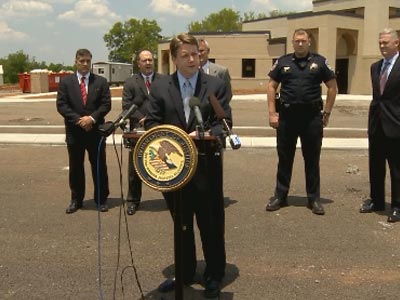 A federal grand jury on Thursday charged 24-year-old Texas resident Javier Alan Correa with violating the civil rights of members of a mosque in Murfreesboro, Tenn. mosque that has been the target of previous anti-Muslim attacks.

Correa is charged with “intentionally obstructing by threat of force the free exercise of religious beliefs and one count of using an instrument of interstate commerce to communicate a threat to destroy a building by means of an explosive device,” the feds said in a press release.

Correa allegedly used a cell phone to call the Islamic Center of Murfreesboro and left a message saying there was going to be a bomb in the building on the 10th anniversay of the September 11 terrorist attacks. “Listen up you fucking Muslim bitches, go back to your fucking dirty fucking country, fucking Muslim fascists, get the fuck out of here,” he allegedly stated.

“The controversy and criminal activity surrounding the construction of this particular place of worship has impeded the ability of people to exercise that most basic right,” U.S. Attorney Jerry E. Martin of the Middle District of Tennessee said in a statement. “We will continue to monitor the progress of construction and legal proceedings at the local level to insure these citizens are able to enjoy all basic liberties guaranteed under the Constitution.”