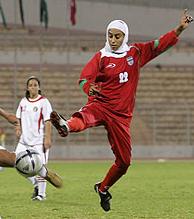 Football clubs fear that a decision by the sport’s world governing body to ban Islamic head scarves will trickle down to the local level. The Iran girls’ football team has been kicked out of the Youth Olympic Games because FIFA ruled that wearing a hijab was not in accordance with laws of the game relating to on-field equipment.

“It’s extremely disappointing, especially because we’re trying to encourage local females to play sport, head scarf or no head scarf. It’s a smack in the face for all the hard work we have been doing. It’s not an occupational hazard and it’s definitely not a sporting hazard. The number of Muslim girls playing soccer at an elite level is already very few. To restrict these few females achieving at a high level, it’s very demoralising.”

The number of girls’ football teams in the club has risen from one to five in the past four years, which Dr Rifi said was a direct result of opening the sport up to players “from all religions, races and cultures”. Two girls playing at state level had the potential to represent Australia, he said.

“It is going to trickle down and will give justification to local associations to use that excuse at the grassroots level.”

FIFA’s rules state players may not wear jewellery or dangerous headgear such as hair clips, and that “basic compulsory equipment must not have any political, religious or personal statements”. Football Federation Australia’s and Football NSW’s interpretation of the rules allow hijabs to be worn if they are made from a special elastic material.

The chief executive of Blacktown and District Soccer Football Association, Jack Taylor, said the ruling was ”bullshit”. He hoped Football NSW and the FFA would take little notice of it. “Our numbers are growing because of the way we’ve made all women welcome. To say, ‘Sorry, you can’t play football because you’re wearing a hijab,’ is really discriminatory.”