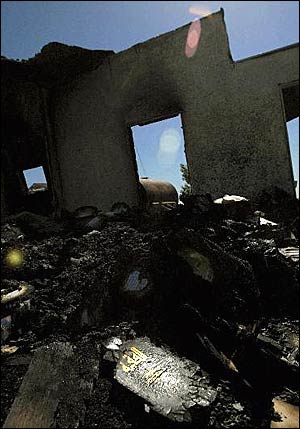 ADELANTO — An early Friday morning blaze that destroyed a mosque in a cemetery has prompted the FBI to investigate whether the fire was started by someone motivated by hate.

Laura Bosley, an FBI spokeswoman, said the agency has not determined whether the fire that leveled the mosque at the United Islamic Youth Organization and Cemetery is a hate crime. She said an investigation into the blaze, which caused $225,000 in damage, is ongoing.

The cemetery’s caretakers, Ali and Michelle Khawaja, are hesitant to label the incident a hate crime. Michelle Khawaja said she doesn’t want to believe anyone in the community could be capable of something so cruel. “It stood for community; it stood for brotherhood,’ she said of the mosque. “I’m an American and a convert, and I would like to think that my American brothers and sisters believe in the rights of all people to freely worship.’

The 1,800-square-foot Muslim prayer hall was a place where people went to meditate and grieve over the loss of loved ones. The modest white building with two minarets was more than just a gathering place for the Muslim faithful in this High Desert town; it was a symbol of Islam and its fundamental beliefs, Michelle Khawaja said.

The blaze reduced the simple structure to a pile of smoldering ash and rubble. Authorities have not concluded whether it was started intentionally, said San Bernardino County Fire Department spokeswoman Tracey Martinez.