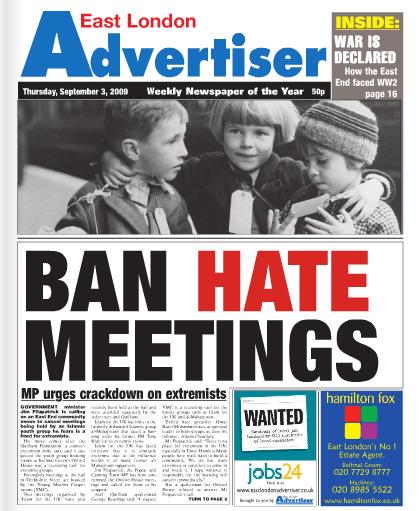 Meetings”. That is the front-page headline in this week’s East London Advertiser.

The subheading is “MP urges crackdown on extremists”, and the paper reports that Jim Fitzpatrick has called on Oxford House, a community centre in Bethnal Green, to stop hiring out meeting rooms to a youth group called Young Muslim Cooperation, which he claims is “a front for extremists”.

The report states that Islam for the UK, a successor organisation to al-Muhajiroun, has held a couple of meetings at Oxford House, and the suggestion is that YMC too is an arm of Anjem Choudary’s organisation.

As it happens, this contributor to Islamophobia Watch has a far from libertarian stance when it comes to al-Muhajiroun. I think Ken Livingstone was right to ban them from holding their provocative demonstrations in Trafalgar Square, and in my view their notorious protest against British troops in Luton earlier this year should have been suppressed under the Public Order Act. If Oxford House has indeed allowed Islam for the UK to book meetings there, I think that was a mistake (even though the East London Advertiser comes up with no evidence that any meetings at the centre were in fact used to incite “hate”).

If Fitzpatrick was genuinely interested in constructively addressing this issue, however, then the solution would have been to approach the management at Oxford House and raise his concerns with them privately. Instead he has gone running to the press in search of yet another scaremongering headline.

Anyone who was inclined to take the charitable view that Fitzpatrick’s recent much-publicised walk-out from a gender-segregated wedding at the London Muslim Centre was just an example of clodhopping cultural insensitivity was obviously wrong. It now seems clear that Fitzpatrick has consciously launched a campaign aimed at whipping up a moral panic over Islamism in the East End.

Also worth noting is the apparent involvement of the Quilliam Foundation in this campaign – George Readings of the Spittoon blog is quoted by the Advertiser as a spokesperson for the organisation, stating that he “suspects” YMC is being used as a “recruiting tool” by al-Muhajiroun. The Quilliam Foundation is of course notorious for issuing blanket denunciations of Islamism that blur the distinctions between mainstream organisations like Islamic Forum of Europe, sectarian tendencies like Hizb ut-Tahrir, more extremist sects like al-Muhajiroun, and Al-Qaeda-inspired would-be terrorist groupuscules.

It is unclear what Fitzpatrick hopes to gain here. Perhaps he calculates that Muslim voters who are influenced by the East London Mosque will inevitably support Respect candidate George Galloway in next year’s general election anyway, that two-thirds of the electorate in the constituency are non-Muslim, and that he can consolidate support among both white voters and anti-Jamaat sections of the Bangladeshi community by launching a generalised attack on Islamism that will associate the IFE with al-Muhajiroun.

If so, it is a strategy that will have a far more damaging effect on community relations in Tower Hamlets than anything a few poorly attended meetings organised by Islam for the UK could achieve.