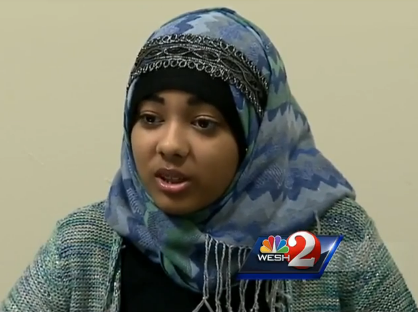 A Florida girl said she has been verbally and physically assaulted because she wears a hijab, or head scarf, to school.

Zahrah Habibulla, 14, said she didn’t have problems at school with other children until she started wearing her hijab on Dec. 14. The Polk County teen said she wears the hijab for religious reasons. “I’ve been bullied in school,” she said. “I had verbal assaults, physical assaults.”

Each time the teen was attacked, she told her mother, who then called the principal of Ridge Community High School. Zahrah’s parents told WESH 2 News in an exclusive interview that they want something done before their daughter is hurt. “It breaks my heart. I don’t want to see that,” said Zameena Habibulla. “I’m hoping for a safer school for her. Every day she goes to school I’ve got fear.”

The Polk County School District released the following statement Monday: “Since learning of these concerns, school officials have taken a proactive role in addressing any issues to ensure the safety and welfare of the student. The School Board remains committed to providing an educational environment that is safe, secure and free from harassment or bullying.”

A member of the American Muslim Youth Leadership Council has also met with the school’s principal to urge action from school officials. “I believe the school has failed to provide a safe atmosphere for this young lady,” said Imam Abufarah.

Zahrah’s mother has retained legal counsel while she attempts to schedule another meeting with the school’s principal.