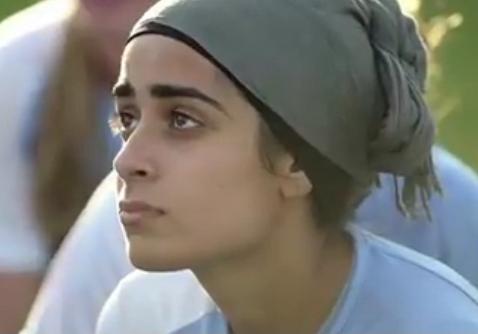 Cheering up their Muslim teammate, a Floridian high school football team decided to don hijab before their season finale game to show solidarity with their Muslim captain who has been taunted repeatedly over her religious outfit.

“Everybody looked at us weird,” West Broward senior Marilyn Solorzano told Sun Sentinel website on Friday, April 20. “I understand now everything she went through and how hard it must have been.”

Donning hijab in middle school, Irum Khan, 17-year-old captain of West Broward High flag football team, endured far more than the usual pre-teenage taunting. Early during her first years of high school, some classmates called her a terrorist and cursed at her. She had rocks thrown at her and was physically attacked more than once.

“I got a lot of weird looks when I started wearing the hijab,” said Khan, who first donned the modest clothing in fifth grade and wears long sleeves and tights under her uniform. “Kids at that age don’t know a lot about it. I went through half the year in sixth grade and then I took it off. I couldn’t take the name-calling, the strange looks, the racial slurs. It was too much.”

Though she hid the abuse from her family and school officials, she finally spoke up as her parents encouraged her to talk with school administrators and things got better.

Though none of Khan’s team has ever faced this bullying, they decided to take a stand and get a small taste of how difficult life can sometimes be for one of their own.

The idea of wearing hijab was first mentioned by Khan when she jokingly said it would be interesting for the whole team to wear the traditional Muslim dress during a game. Instead of laughing, Solorzano, a fellow captain, seized on the opportunity. “Everyone thought it was a really cool idea to support her and her religion,” she said.