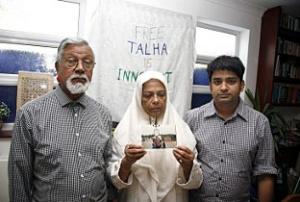 The family of Tooting’s ‘forgotten’ terror suspect, who remains in jail without trial, are preparing to mark the fifth anniversary of his imprisonment.

Syed Talha Ahsan – a 31-year-old writer with Asperger syndrome – was arrested at his home in Franciscan Road, Tooting, on July 19, 2007, after US authorities requested his extradition. He is accused in the US of terrorism-related offences arising out of an alleged involvement with a series of websites between 1997 and 2004. Mr Ahsan’s case is linked to that of Babar Ahmad – but he has received much less media attention than Mr Ahmad, who was arrested in 2003 and is also still in prison.

Mr Ahsan, who graduated from the School of Oriental and African Studies with a First in Arabic, has never been charged or tried in this country. He is currently in the final stage of proceedings at the European Courts of Human Rights – fighting against extradition.

Speaking to the Wandsworth Guardian this week, Mr Ahsan’s 73-year-old father, Syed Abu Ahsan, said the family was “very very depressed” about the situation, adding he did not hold out much hope his son’s case would be resolved soon. He said: “Nobody is above America. If they say something nobody dares to say differently.”

But Mr Ahsan’s family continue to lobby the Home Secretary to give him a fair trial in the UK, giving special consideration to his medical conditions. On July 19, they will be at the Islamic Human Rights Commission bookshop, in Wembley, where supporters will give readings from a book of poetry Mr Ahsan has written and had published while in Long Lartin Prison.

Mr Ahsan’s MP, Sadiq Khan, who has spoken out about Mr Ahmad’s case in the past, said: “It is extremely distressing for Mr Ahsan’s family that this case continues to drag on. I have met with the Extradition Minister to discuss this case and the case of Babar Ahmad. Although the Government is reviewing its policy on extradition to the United States, they have told me it is unlikely to cover existing cases, which is bad news for the family. I am hopeful that the European Court of Human Rights will make a judgement soon on the case.”

A spokeswoman for the Home Office had not responded to any queries as this week’s paper went to press.