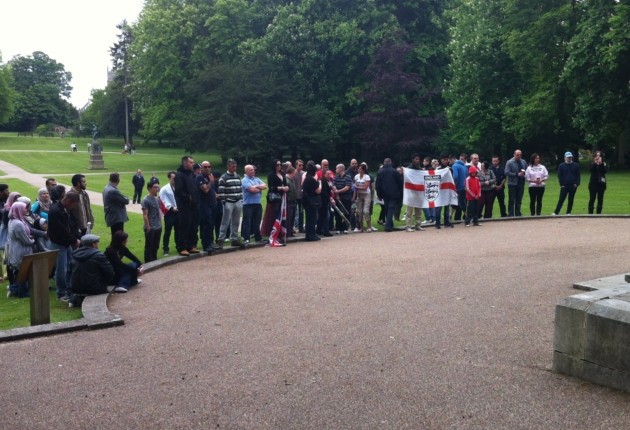 You might wonder how any self-respecting Islamic organisation could possibly have invited an individual with Lennon’s record of inciting anti-Muslim hatred to speak at one of their events. Didn’t JIMAS realise that, for all Quilliam’s dishonest efforts to present him as an ex-extremist, Lennon still obstinately defends his actions as leader of the EDL?

Only a couple of days ago, after a school in Northumberland cancelled an invitation to Lennon to address their pupils, he was boasting that when he led the EDL “the vast majority of people were agreeing with what I was saying”, and he happily retweeted a message from a supporter applauding him for “standing up to these Islamic brainwashed fucking orrible Muslims”.

Unfortunately the answer is that, even if they did know that Lennon has failed to break with his extremist past, JIMAS wouldn’t care. This is the organisation who in June last year, following the murder of Lee Rigby, very publicly joined an EDL demonstration in Ipswich – to the understandable outrage of many in the town’s Muslim community.

The advertisement for the JIMAS HMD event also states that Sara Khan of the Muslim women’s organisation Inspire will be chairing it, though it is difficult to believe that she would be prepared to share a platform with someone like Lennon. However, Inspire have failed to respond to requests for clarification. You can contact them here.

JIMAS announced that their HMD event was to be opened by Professor Dave Muller, Principal of Suffolk New College, so it clearly had the official support of that institution. But this was evidently before they found out who would be on the platform. According to a report on Andrew Coates’s blog, the college has now cancelled the event.

However JIMAS have circulated an email stating that they intend to find an alternative venue. So it seems that the HMD event may go ahead anyway. You can contact JIMAS here.