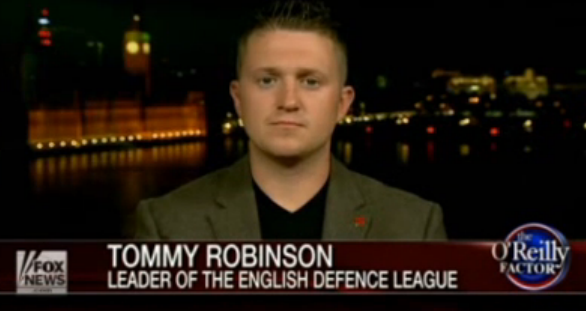 O’Reilly hosted Robinson on The O’Reilly Factor to discuss the EDL’s efforts to, as Robinson described, “fight for Christianity, fight for our children’s future, fight for our culture, and fight for our country’s identity, which is completely under attack.” Robinson went on to claim that British politicians aren’t doing enough to suppress the growth of Muslim communities in the United Kingdom, adding “actions speak a lot louder than words.”

Although O’Reilly mentioned press reports describing the EDL as “fascist” and “racist” and described the group’s views as “militant” at the beginning of the segment, he failed to note the EDL’s history of incendiary and often violent actions. A 2010 “undercover investigation” by The Guardian found that the organization planned protests against Muslim communities in “a blatant attempt to provoke mayhem and disorder”:

Of course, it’s not just Fox News that mainstreams the EDL and its leader. Stephen Lennon was invited to appear on ITV’s Daybreak programme yesterday, though the invitation was cancelled for reasons that are unclear. See Sunder Katwala, “If broadcasters want to give extremists a platform, they need to tell us why”, New  Statesman, 6 June 2013