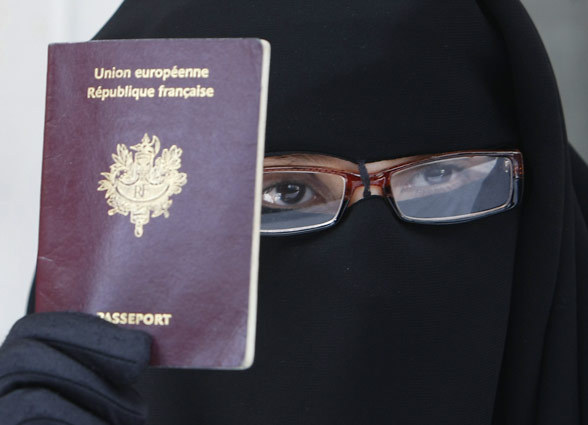 From Saudi tourists window-shopping on the Champs-Élysées to Muslim women in a departure lounge at Charles de Gaulle airport or the few young French converts on suburban estates, any woman who steps outside in France wearing a veil that covers her face will be breaking the law from next month.

France’s bitterly divisive debate on Muslim women’s clothing took a new turn when the legal details of the controversial “burqa ban” were published in a decree by the prime minister. From 11 April women will be banned from wearing the niqab – full-face Muslim veil – in any public place, including while walking down the street, taking a bus, at a bank, library or shop, or in a cinema or theatre. It will be illegal for a woman in niqab to visit the Louvre, or any other museum, take a train, visit a hospital or collect her child from school.

Face veils will be outlawed virtually anywhere outside women’s own homes, except when they are worshipping in a religious place or travelling as a passenger in a private car, although traffic police may stop them if they think they do not have a clear “field of vision” while driving. Women wearing niqab will be fined €150 (about £130) and be given a citizenship class to remind them of the republican values of secular France and gender equality. Any third party found to have coerced a woman into wearing the face covering, for example a husband or family member, risks a €30,000 fine and a year in prison.