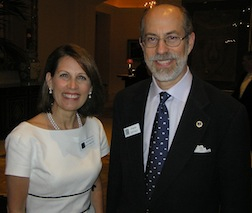 “Gaffney has turned up so many ‘Muslim infiltrators’ in government or civic positions that it is difficult to keep track. If a Muslim runs for political office, or even wants to get involved in their local community, or establish any sort of institution, whether they are a Republican or a Democrat, outrageous charges of ‘creeping Sharia prononent’,  ‘stealth jihadist’, ‘Muslim Brotherhood plant’, etc. are made by Islamophobes.”