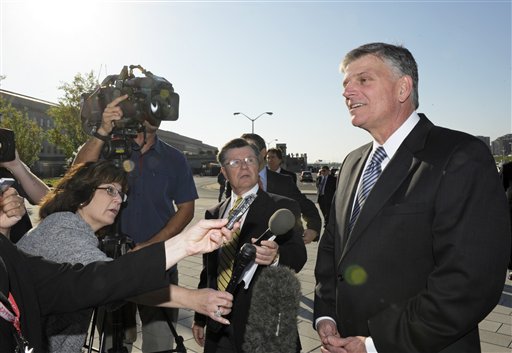 Evangelist Franklin Graham prayed on a sidewalk outside the Pentagon Thursday after his invitation to a prayer service inside was withdrawn because of comments that insulted Muslims.

“It looks like Islam has gotten a pass,” he told reporters. “They are able to have their services, but just because I disagree … I’m excluded.”

In 2001, Graham, the son of famed evangelist Billy Graham, described Islam as evil. More recently, he said he finds Islam offensive and wants Muslims to know that Jesus Christ died for their sins. The Pentagon’s chaplain office called those comments inappropriate and, at the request of the Army, withdrew Graham’s invitation to attend a multi-denominational “National Day of Prayer” service that was held in the Defense Department auditorium.

He came anyway, arriving in the Pentagon parking lot just before 8 a.m. EDT – his party of a half dozen people forming a circle on the sidewalk and praying.

Asked why he had come, Graham said it was to pray for the men and women serving at the warfront, including his son, who he said had already been wounded in Iraq and now serves in Afghanistan.

He said he doesn’t believe “all religions are equal” but does believe there is only “one way to God” – and that is through Jesus.

Asked if he still believes Islam is evil, he said: “I believe the way they treat women is evil, yes I do.” And, can he understand how some of his comments would be offensive to Muslims? “Oh, I’m sure,” he said. “But I find what they teach and what they preach and what’s on the Internet – I find that to be offensive, too.”