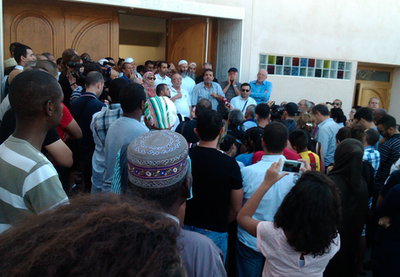 The Collectif contre l’Islamophobie en France draws our attention to reports that Christophe Lavigne, a sergeant in the French airforce with far-right links, will not now be prosecuted.

Lavigne was arrested last August and charged with planning an armed attack on worshippers at the Al Forqane mosque in the Lyon suburb of Vénissieux to coincide with the end of Ramadan.

Judges had already dismissed the charge against Lavigne of possessing ammunition in connection with a terrorist enterprise, on the grounds that the bullets were of a grade permitted for collectors of historical weapons and so were not illegal. This ruling has now been confirmed by the court of appeal in Paris.

Lavigne will stand trial in June on a charge of desecration of a place of worship in connection with a terrorist enterprise, having reportedly confessed to an earlier firebomb attack on a mosque in Libourne.

The CCIF comments: “There is no doubt that he represents a real terrorist threat, as he has already shown in practice by throwing a Molotov cocktail at the mosque in Libourne in August 2012. So how could this armed, dangerous and recidivist Islamophobe have been able to escape conviction and not be expelled from the French armed forces either?”