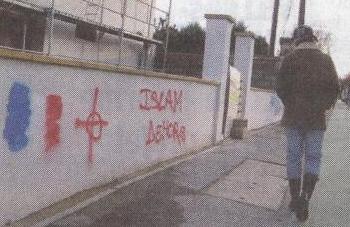 A French Muslim organisation has condemned a weekend attack on a mosque north of Paris.

The phrases “Islam get out of Europe” and “France is for the French” were scrawled on the walls and entrance of a mosque in Crepy-en-Valois.

The mayor’s office of Crepy-en-Valois denounced what it called a “horrible, idiotic act”, while the French Council of the Muslim Faith said the attack was the latest in a long line of incidents that had targeted mosques in France. The organisation called on authorities to take action to end the “series of shameful and hateful profanities that target houses of prayer.”

The Council, whose members are elected by French Muslims, also called for French President Nicolas Sarkozy to back a parliamentary commission that would examine the rise of Islamophobia in France. The proposal was dropped from last week’s report that called for a ban on the full Islamic veil in official public spaces like government offices, hospitals or schools.

Last month a mosque in the southern town of Castres was targeted and had swastikas and the phrase daubed Sieg Heil on its walls.