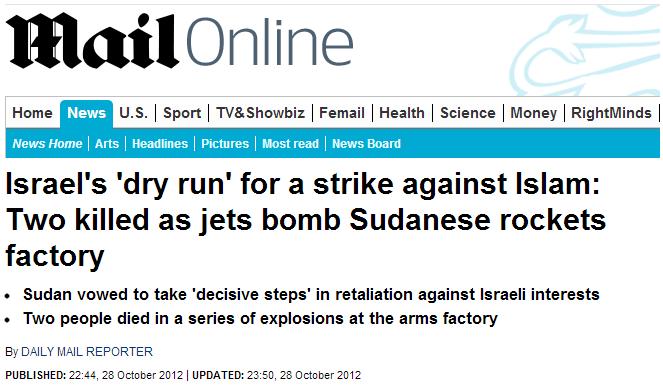 This is the headline to an article in the Daily Mail reporting claims that Israel has destroyed a Sudanese weapons factory in a bombing raid. The article itself suggests that “the raid acted as a ‘dry run’ for a forthcoming strike on Iran’s nuclear facilities”. The subeditor’s substitution of “Islam” for “Iran” in the headline tells us a lot about the general mindset at the Mail.

Update:  The headline has now been amended.

Earlier this year the Mail reported that the existence of the Freudian slip had been confirmed by scientific research: “A new study has revealed how the theory, which forms part of the basis of psychoanalysis, is linked to the conscious symptoms of people with anxiety disorders such as phobias.”