The Luton-based initiative ‘From Headscarves to Football Scarves’ went on a trip to Arsenal’s Emirates Stadium last Saturday.

Organiser of the event, Butch Fazal, said: “It was superb, we had a great time and the girls were blown away by being pitchside.”

The group has big plans for the future, not just limited to more stadium trips for Luton girls.

Mr Fazal added: “It gives us a platform to build on.

“It’s great that these young Muslim women from Luton have the chance to go and watch football across the country, but ideally we want people from all over the UK to get involved in the project with the girls from Luton acting as ambassadors.”

And “Headscarves to Football Scarves a great success”, Kick It Out, 21 October 2014

Needless to say, the far right are not happy. 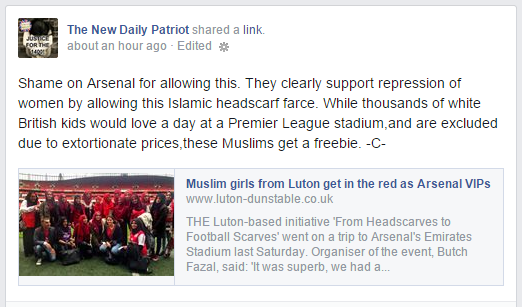