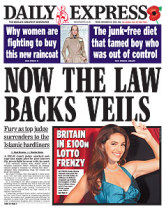 “A High Court judge sparked outrage last night after he gave lawyers the green light to wear veils in court. The ruling was made after a Muslim solicitor twice refused an immigration judge’s request to reveal her face – despite him explaining that he could not hear her speak.

“Mr Justice Hodge, who was asked to issue guidance over the case, yesterday defended the right of lawyers to wear the niqab and said it was ‘important to be sensitive’. His decision was widely condemned by critics, who claimed he had caved in to Islamic hardliners….

“David Davies, Conservative MP for Monmouth, said the decision caved in to Islamic pressure. He added: ‘British courts are there to determine whether the truth is being told. How can they do that if they cannot hear? Allowing people to hide their faces in a court where all should be laid bare in the search for truth and justice is not good enough. If we were in a Muslim court we would be expected to abide by their rules on dress. So why is it that this lady can work in a British court and wear whatever she likes?'”

The Express editorial, headed “Allowing veils in court is a deeply disturbing move”, condemns the decision as “yet another act of multicultural surrender” which has allowed “Islamic pressures to undermine yet another foundation of our society”. It adds: “The very idea of a disembodied voice, steeped in a defiantly alien culture and covered entirely in black, being able to take away the liberty of any Briton is quite disgusting.”