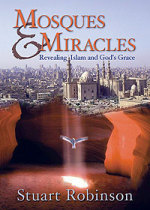 Christians are being urged to stand up against what a visiting author says is a Muslim push to take over the world. Pastor Stuart Robinson, Australian author of the book Mosques and Miracles, has drawn about 200 people to a conference in Greenlane this weekend aimed at revealing what he says are the true dangers of Islam.

Mr Robinson’s two-day Mosques and Miracles conference has been organised by missionary groups Open Doors, Middle East Christian Outreach, Asian Outreach and Interserve, with support from the Vision Network of evangelical churches. He said most Westerners did not understand that Islam taught that peace would prevail in the world only when the Muslim religion predominated.

He said Muslim theology “teaches that war has to be prosecuted against the infidel until the day of judgment when Jesus Christ returns”. Unlike Christianity, which offered salvation simply through faith, he said Islam taught that the only sure way to paradise was to die as a martyr for the faith. “That becomes an enormous recruitment device for a lot of the suicide bombing that we see,” he said.

But Mr Galloway, a Catholic who has backed the Palestinian cause for 32 years, said New Zealand’s 45,000-strong Muslim community was moderate and law-abiding and had never carried out any terrorist acts. “Have you seen any signs of New Zealand’s Muslims launching a jihad [holy war]?” he asked. “Of course you haven’t. These people [Mr Robinson’s followers] are trying to place fear and hatred in the hearts of ordinary New Zealand people against peaceful neighbours.”