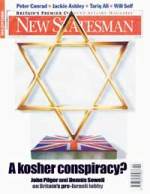 “In January 2002 the New Statesman published a front page displaying a shimmering golden Star of David impaling a union flag, with the words ‘A kosher conspiracy?’ The cover was widely and rightly condemned as anti-semitic….

“A group calling itself Action Against Anti-Semitism marched into the Statesman’s offices, demanding a printed apology. One eventually followed. The then editor, Peter Wilby, later confessed that he had not appreciated ‘the historic sensitivities’ of Britain’s Jews. I do not remember talk of a clash of civilisations in which Jewish values were inconsistent with the western traditions of freedom of speech or democracy. Nor do I recall editors across Europe rushing to reprint the cover in solidarity.

“Quite why the Muslim response to 12 cartoons printed by Jyllands-Posten last September should be treated differently is illuminating…. they are vilified twice: once through the cartoon, and again for exercising their democratic right to protest. The inflammatory response to their protest reminds me of the quote from Steve Biko, the South African black nationalist: ‘Not only are whites kicking us; they are telling us how to react to being kicked’.”

Excellent article by Gary Younge in the Guardian, 4 February 2006

In the opinion of this Islamophobia Watch contributor the New Statesman cover was indeed anti-semitic and protests against it were justified. We have reproduced it here from Ha’aretz.