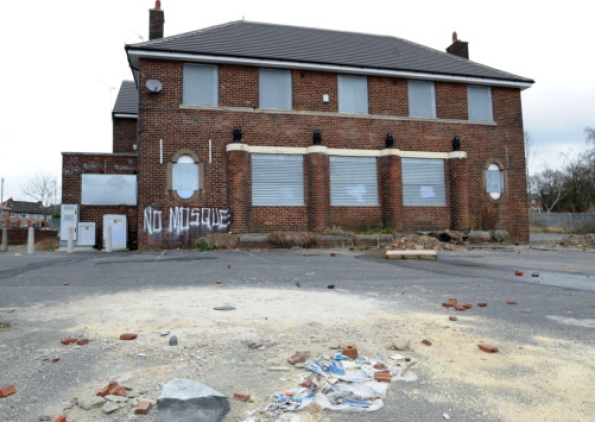 Police watched over a council planning meeting where emotions ran high over a proposal to create a Muslim-run community and welfare centre.

Officers attended plans panel north and east at Leeds City Council where members unanimously voted to give the go-ahead to convert the derelict Lingfield pub in Moortown.

Applicants UKIM, UK Islamic Mission, who bought the site, want to create a public gym, IT suite, library, training facilities and a prayer room for up to 70 worshippers.

More than 400 letters of objection were received over traffic, congestion and noise concerns. Many also expressed fears the centre would be used exclusively by the Islamic community. The night before the planning meeting the words “no mosque” were repeatedly daubed on the exterior of the forlorn building.

In a deputation to the panel, Gavin Boby, of the Law and Freedom Foundation, said he spoke against the plan on behalf of the Lingfield community: “Community use is laughable. It is a lie. It is a facility for a specific sector alone. You will find it will only be used by one sector.”

Asked how many local people he knew would use the centre, Mohammed Arif of UKIM, said five households. He added that all facilities, including the “thorn in everyone’s side”, the prayer room, would be open to everyone.

The proposed community centre is subject to 21 restrictions, including opening hours from 8.30am to 10.30pm, or midnight during the month of Ramadan when visitor numbers can be no more than 65. The building cannot be used for weddings and must be open to community use.

Mr Arif said: “I am relieved by the result. We are in no mad rush and need to forge links with the community first.”