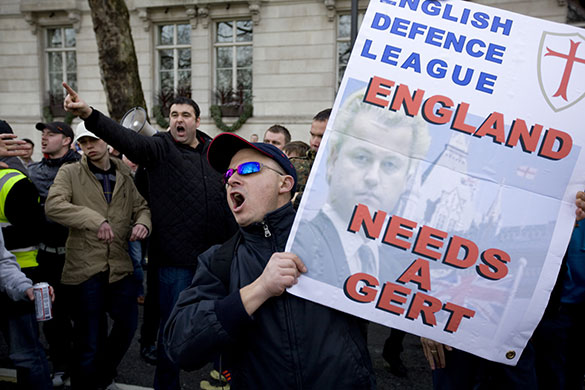 Geert Wilders has stepped up his anti-Islam rhetoric by describing the Prophet Mohammed as an “insane, paedophile, rapist murderer” just two weeks before the opening of his trial on charges of inciting race hatred.

The leader of hard-Right Dutch Freedom Party will be prosecuted in an Amsterdam court on April 13 for previous comparisons of Islam to Nazism. On Thursday he fuelled the controversy surrounding his anti-Muslim politics and trial by publishing an article citing academics who accuse Islam’s founder of crimes ranging from child rape to murder.

“The historical Mohammad was the savage leader of a gang of robbers from Medina. Without scruples they looted, raped and murdered,” Mr Wilders claimed in the Dutch magazine HP/De Tijd.

In the article, Mr Wilders, whose Freedom Party MPs control the balance of power in the Dutch parliament, attacked fines levied on an Austrian feminist “for insulting a religion by calling Mohammad a paedophile”. “However, that is the truth,” he wrote, citing the Muslim prophet’s consummation of a marriage to a wife who claimed she was a child aged nine at the time.

Mr Wilders hypothesised that Mohammad suffered from a brain tumour causing the “paranoid schizophrenia” that led him to found the Muslim faith. “Mohammad had an unhinged paranoid personality with an inferiority complex and megalomaniac tendencies. In his forties he starts having visions that lead him to believe he has a cosmic mission, and there is no stopping him,” he wrote.

“An unhinged paranoid personality with an inferiority complex and megalomaniac tendencies” who “starts having visions that lead him to believe he has a cosmic mission, and there is no stopping him”. Sounds like a pretty good description of Wilders himself, if you ask me.

Update:  The English Defence League have now reproduced Wilders’ “Time to unmask Muhammad” article on their website, declaring that “we support Geert Wilders’ call for the true character of Islam’s prophet to be exposed”.