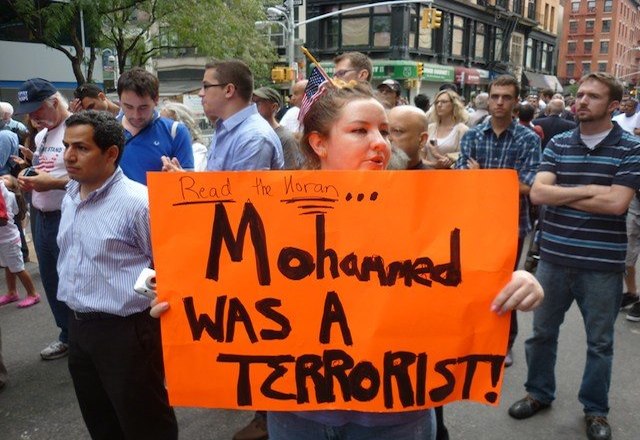 “There is no smiley face, no whitewash on what happened here ten years ago today. What happened, was murder!” As she peppered her speech with soundbites, Pamela Geller was occasionally forced to pause for chants of “U-S-A!” from the smattering of supporters who had turned out for her Freedom Rally yesterday in Lower Manhattan. It was doubtful that there were any “smiley faces” at the official commemoration at the 9/11 Memorial that morning, but if you spoke with attendees of the Freedom Rally, one might have gotten the impression that Presidents Obama and Bush presided over a mass burning of Bibles and bald eagles.

“This country has become communist,” Sheepshead Bay resident Patricia Randolph told us. “A good way to fight for freedom is to know your history, to know that Muslims build victory mosques in places that they have conquered.” She was referring of course to Park51 a cultural center and mosque that may be built blocks from the World Trade Center site. “And have you heard about that mosque they’re building in Sheepshead Bay near a school? Those women that walk around my neighborhood with black nails? They’re Taliban wives.” Her friend Elizabeth of Midwood added, “The Muslims rape little girls, we have to make it safe for the kids.”