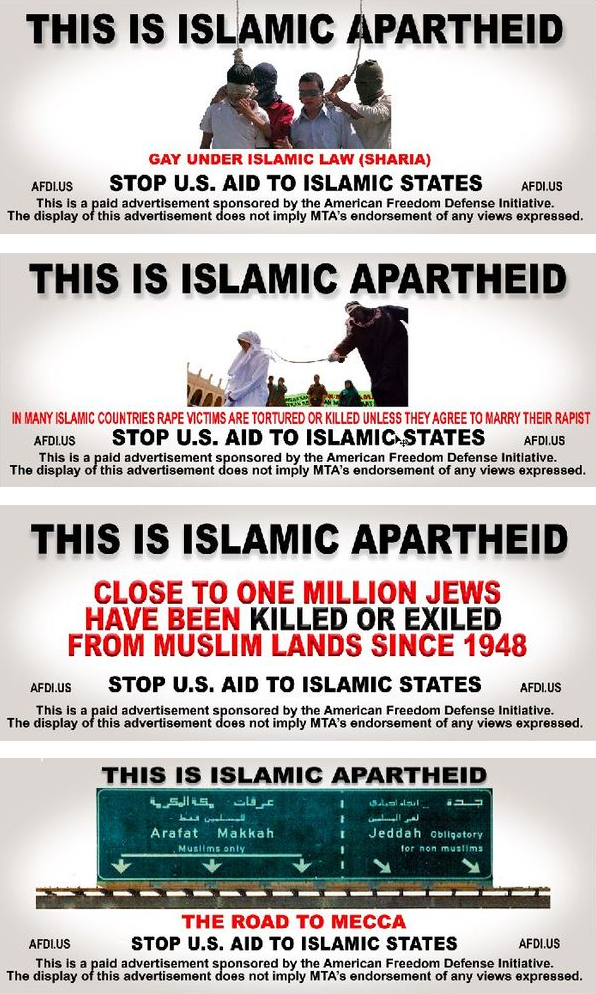 The pro-Israel group that called enemies of the Jewish state “savage” in subway ads will launch a new campaign to counteract pro-Palestinian billboards that were installed on Metro-North trains this week.

The new ads, paid for by the American Freedom Defense Initiative, feature disturbing images under the headline: “This is Islamic apartheid.”

One of the images shows two blindfolded men getting wrapped with nooses. Below the image, it reads, “Gay under Islamic law (Sharia).” The picture is from Iran, said Pamela Geller, head of the AFDI.

Another picture shows a woman dressed in a white burqa getting whipped above the words: “Under Islamic law rape victims are tortured or killed unless they agree to marry their rapist.” Geller said that picture is from Indonesia.

She submitted the ads to the MTA yesterday. It’s unclear when they will go up; her ads have been approved before.

The reference to apartheid is a direct rebuttal of the American Muslims for Palestine ad, which went up on Monday – the first day of Passover – in 25 MetroNorth stations. Geller requested her ads be hung in the same stations, which include Fordham and 125th Street.

The pro-Palestinian ads read: “Americans give Israel $3 billion per year! End Apartheid now!” A spokesman for the Muslim group said the ads were about reclaiming their heritage. She also said it was a coincidence that they went up on Passover.

On her Atlas Shrugs blog, Geller denounces the American Muslims for Palestine ad as a “Goebbels-style demonization of the Jews” run by “Muslim Jew-haters”. You can decide for yourself whether this description bears the remotest relationship to reality.