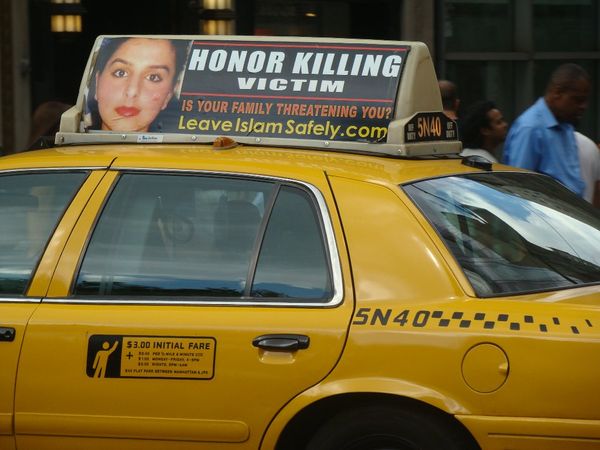 The ads, sponsored by the group Stop of Islamization of America, appeared on 25 Chicago cabs this summer. Beside pictures of young women who were allegedly killed by their Muslim fathers for refusing an Islamic marriage, dating a non-Muslim or becoming “too Americanized” was the message: “Is your family threatening you?” The placards also displayed the Web address LeaveIslamSafely.com.

Michael Levine, the CEO of Yellow Cab Chicago, said the signs were offensive to the city’s taxi drivers, an estimated half of whom are Muslim. The ads were carried by independent Yellow Cab affiliates, Levine said in a statement. The fleet owner was paid by a company that specializes in advertising atop taxis.

When Yellow Cab learned of the placards three weeks ago, it called the advertising company and asked to have the ads removed, according to Levine. Yellow Cab was told they were taken down, but found out Tuesday that three ads were still running atop taxis.

“They will be removed,” Levine said. “Yellow Cab does not regularly approve advertising content carried by our affiliates, but we do reserve the right to ask them to remove ads that offend either the drivers or the public.”