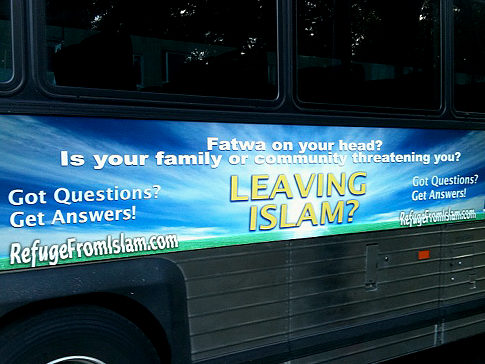 NEW YORK — The questions on the ads aren’t subtle: Leaving Islam? Fatwa on your head? Is your family threatening you?

A conservative activist and the organizations she leads have paid several thousand dollars for the ads to run on at least 30 city buses for a month. The ads point to a website called RefugefromIslam.com, which offers information to those wishing to leave Islam, but some Muslims are calling the ads a smoke screen for an anti-Muslim agenda.

Pamela Geller, who leads an organization called Stop Islamization of America, said the ads were meant to help provide resources for Muslims who are fearful of leaving the faith. Geller said the ad buy cost about $8,000, contributed by the readers of her blog, Atlas Shrugs, and other websites. Similar ads have run on buses in Miami, and she said ad buys were planned for other cities.

Metropolitan Transportation Authority officials said Geller’s ad was reviewed and did not violate the agency’s guidelines. “The religion in question would not change the determination that the language in the ad does not violate guidelines,” MTA spokesman Kevin Ortiz said Wednesday.

Faiza Ali, of the New York chapter of the Council on American-Islamic Relations, said the ads were based on a false premise that people face coercion to remain with Islam. She said Muslims believe faith that is forced is not true belief. Geller has a history of speaking out against Muslims, and the ads are “a smoke screen to advance her long-standing history of anti-Muslim bigotry,” Ali said.

Update:  Robert Spencer is not happy.