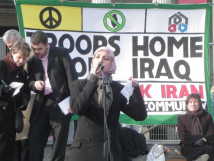 “Unfortunately, despite the intentions of its authors, I fear that their focus on attacking the currently dominant faith organisations will generate more heat than light. In conflating HT with the BNP as if they both pose equal threats to race relations; in echoing in all but name the charge of ‘Islamofascist’ against organisations like MCB; in regurgitating, along with the government and rightwing tabloids, the spectre of sinister self-appointed Muslim community leaders who keep the their foot firmly on the neck of their communities; the manifesto only serves to add more layers of confusion than strip them away.”