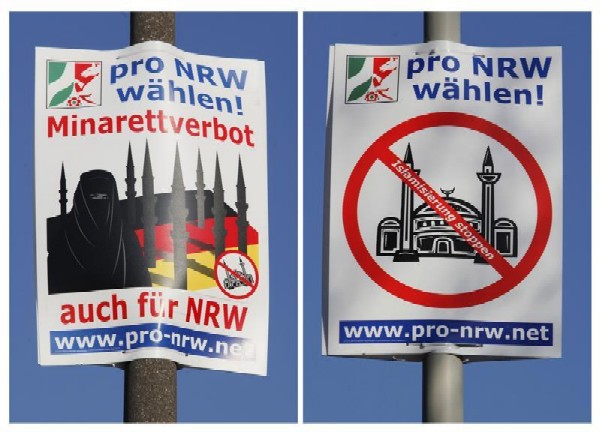 A far-right party on the campaign trial in Germany’s most populous state is threatening to put caricatures of Mohammed outside mosques in a string of cities.

The “Pro NRW” party in the western state of North Rhine-Westphalia has already shown anti-Islamic caricatures in Essen and Gelsenkirchen, though the police prevented demonstrations taking place directly outside mosques. Police have also banned “Pro NRW”, which is campaigning on an Islamophobic platform, from using the Danish cartoons that caused massive protests in the Islamic world in 2005.

But “Pro NRW” intends to send activists to 25 mosques throughout the state in the run-up to the election on May 13, staging protests in Cologne, Bonn, Düsseldorf, Aachen, Wuppertal and Solingen. A report in Die Welt newspaper on Sunday said the far-right party intended to post around 100 what it called “Islam-critical” drawings outside the mosques.

Interior Minister in state Ralf Jäger condemned the campaign and expressed support for planned counter-demonstrations. “Pro NRW is committing spiritual arson,” he told the paper. “The party is consciously taking into account that Muslims will feel provoked and upset. The authorities will exhaust all legal avenues to prevent a xenophobic hate campaign.”

The federal Interior Minister Hans-Peter Friedrich is reportedly worried about violent confrontations with the Salafists, the fundamentalist Muslims who began distributing free copies of the Koran in Germany three weeks ago. A report in Der Spiegelmagazine over the weekend said his ministry had been in contact with the North Rhine-Westphalia state government in recent weeks to find a way to de-escalate the situation. The election there is on May 13.

“Pro NRW” campaign manager Lars Seidensticker says he did not understand the outrage over the campaign, and says his party would bear no responsibility for any violence.

“If the situation is so tense that you can’t do a campaign like this against Islamist influences any more, then the politicians are responsible for doing away with Germany,” he said, alluding to the title of a 2010 book by banker Thilo Sarrazin (“Germany Does Away with Itself”), which criticized Islamic immigrants in Germany.

“Mosques are potential centres of a new civil war that we have to prevent,” said Seidensticker. “That’s why we have to pull out the Islamist evil by its roots.”

“Pro NRW”, which boasts 250 members, is also planning to award a cash prize for the “best” anti-Islamic caricature, named after Danish cartoonist Kurt Westergaard, who was responsible for the 2005 images. Westergaard has distanced himself from the competition and is reportedly considering legal action against the party for using his name.