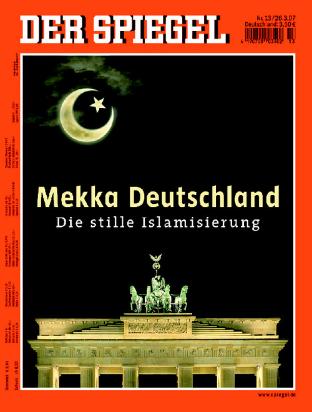 Campaigns alleging that a nation is being ‘swamped’ by foreigners have always been part of the repertoire of right-wing extremist politics. The influx of immigrants, their culture and language is regarded as a threat to one’s ‘own’ people and – depending upon which version is being promulgated – Western or German culture.

In recent times, the danger of being ‘swamped’ has been replaced by that of a ‘Muslim-takeover’, with the difference, however, that such agitation is not limited to right-wing extremist circles. Magazines such as Der Spiegel, Christian Democratic and Social Democratic politicians, and former liberals or leftwing intellectuals have now joined in the chorus.

Der Spiegel appeared on March 26 with the headline, “Mecca Germany. The quiet Muslim takeover.” The front page showed the familiar sight of Berlin’s Brandenburg Gate, swathed in darkness with the Islamic crescent moon and star above.

Regular Spiegel columnist Franz Josef Wagner commented, “Our symbols of justice wear a headscarf or a burka. What sort of country do we live in that our laws are no longer valid?”

The deputy chairman of the Christian Democratic Union’s (CDU) parliamentary faction Wolfgang Bosbach told the press he had long feared “the fact that we are gradually importing moral values from other cultures into Germany, even making them the basis of the legal system.”

The feminist Alice Schwarzer opined that the German legal system had “for a long time, been systematically infiltrated by Islamist forces” and Edmund Stoiber, the Bavarian state premier and Christian Social Union (CSU) chairman, warned, the “rule of law in Germany” should not “kow-tow to the Koran” or let itself be “undermined.”

What has occasioned this extreme agitation? It revolves around a divorce case being heard by the Family Court in Frankfurt am Main, in which a German woman of Moroccan origin wants to divorce her Moroccan husband.