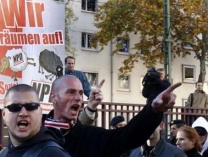 BERLIN — Members of a German neo-Nazi party demonstrated Saturday in Frankfurt against the construction of a mosque in an area which already has two.

About 200 people marched shouting “Stop the Islamisation of Germany,” said Joerg Krebs, a spokesman for the local branch of the NPD, a neo-Nazi party. “We don’t want a big mosque in Hausen,” a Frankfurt quarter, “as there are already two mosques.”

The mosque is expected to cost about 10 million euros. Germany is home to some 3.4 million Muslims and there are 159 mosques scattered over the country. Some 900 people in the city held a counter-demonstration Saturday against the neo-Nazi rally.