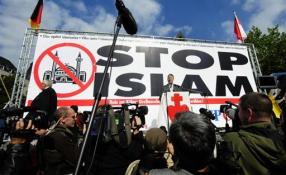 Germany on Wednesday banned three ultra-conservative Salafist Muslim groups which the Interior Ministry said wanted to overturn democracy and install a system based on sharia, or Islamic law.

The ban, which took effect in the western states of Hesse and North Rhine-Westphalia in the early morning, is the latest step taken by German authorities who have increased surveillance of Salafists who espouse a radical version of Islam.

The ministry said it has banned the organisations “DawaFFM” and “Islamische Audios”, as well as “An-Nussrah”, which is part of the “Millatu Ibrahim” group that was outlawed in June. Some 20 people were searched and assets belonging to the organisations were seized, said the ministry.

“Salafism, as represented in the associations that were banned today, is incompatible with our free democratic order,” Interior Minister Hans-Peter Friedrich said in a statement. “(The groups) aim to change our society in an aggressive, belligerent way so that democracy would be replaced by a Salafist system, and the rule of law replaced by Sharia law.”

Germany is home to roughly 4,000 Salafists. They make up only a tiny proportion of the total Muslim population of about 4 million.

Friedrich said the step was part of efforts by Chancellor Angela Merkel’s centre-right government to promote a tolerant and respectful relationship with the large number of peaceful Muslims in Germany.

Last year a series of violent clashes between police and Salafists, sometimes goaded by far-right anti-Islam protesters, near the western cities of Cologne and Bonn raised fears about growing militancy among an underclass of Muslim youths.