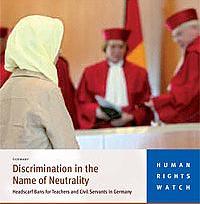 German state bans on religious symbols and clothing for teachers and other civil servants discriminate against Muslim women who wear the headscarf, Human Rights Watch said in a report released today.

The 67-page report, “Discrimination in the Name of Neutrality: Headscarf Bans for Teachers and Civil Servants in Germany,” is based on extensive research over an eight-month period. It analyzes the human rights implications of the bans and their effect on the lives of Muslim women teachers, including those who have been employed for many years. It says that the bans have caused some women to give up their careers or to leave Germany, where they have lived all their lives.

“These laws in Germany clearly target the headscarf, forcing women who wear it to choose between their jobs and their religious beliefs,” said Haleh Chahrokh, researcher in the Europe and Central Asia division at Human Rights Watch. “They discriminate on the grounds of both gender and religion and violate these women’s human rights.”