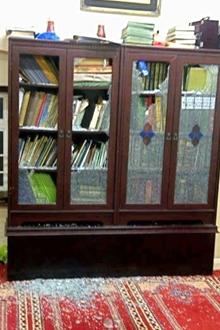 A mosque in Gillingham was burgled and vandalised just hours after the horrific killing of a British Army soldier in south east London, a court heard.

Andrew Grindlay allegedly broke into the Jamia Mosque, in Canterbury Street – smashing a glass cabinet, pulling a shelving unit from the wall and scattering books around the room.

Urine was also running down the door to the mosque and collecting in a pool at the bottom, Maidstone Crown Court was told. The door frame itself was also damaged.

Prosecutor Bridget Todd said police had been tasked to provide reassurance to those using the mosque following the brutal knife attack on Drummer Lee Rigby in Woolwich on May 22.

A patrol car was stationed outside, but within one minute of the officers leaving their post – having been ordered to carry out a roaming patrol – and just half an hour after evening prayers had finished, the mosque was allegedly targeted.

Grindlay, 46, of Kingswood Road, Gillingham, was arrested within feet of the mosque. He was later identified by a witness who made the 999 call as the same man seen inside the mosque door.

Grindlay, who sat in the dock wearing a poppy on his jacket lapel, denies burglary and religiously aggravated damage to property.

Miss Todd told the court at the start of his trial that the break-in occurred on the “absolutely unforgettable” day that Drummer Rigby was killed.

She also said that Grindlay’s phone contained text messages of a “shocking and abusive” nature that had been sent and received in the aftermath of the soldier’s death. One referred to it as a “liberty” while another made a racist and highly offensive remark about those responsible.

A text sent by Grindlay shortly before the mosque was broken into read: “Have you seen the news, sweet? Just popping up Canterbury Street to see what the score is. Won’t be long.”

Miss Todd told the jury the messages were “relevant and important” to the prosecution case. “The defendant was involved in these offences. He entered the mosque as a trespasser and with the intent to cause criminal damage,” she explained. “The damage caused was religiously aggravated and no doubt brought about by the case in Woolwich.”

The court heard Timothy Hargrave lived across the road from the Jamia Mosque and looked out of an upstairs window when his dogs began barking at just after 8.30pm.

The prosecutor said he saw a man wearing a brown jacket and aged about 40 – allegedly Grindlay – banging on the front windows of the building. “He appeared to be very angry and was shouting,” said Miss Todd, “although Mr Hargrave couldn’t hear the words being said.” A second man then ran across the road and kicked the door before falling to the ground.

Mr Hargrave went to call the police before returning to the window. “He saw the mosque door was now open and the man in the brown coat walked out of the door,” continued Miss Todd. “He was now waving his arms at three Asian males in the road. They took no notice of him.”

When the police arrived, the man was said to be a footstep away from the mosque door. “Mr Hargrave said police stopped the same man that he had seen inside the door of the mosque,” added Miss Todd. “That man, the prosecution say, was this defendant.”

When arrested, Grindlay initially refused to give the police his name and then gave what was described by Miss Todd as a “mostly no comment” interview.

The mosque had been left locked and secured at 8.15pm that evening.